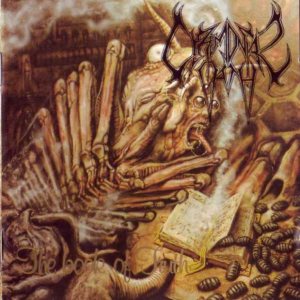 Melodic death metal is one of the sub genres that is most near and dear to this writer’s heart.  After all, it began my entry into the wonderful world of underground metal.  One of the earliest purveyors of the style was Ceremonial Oath – a band that never got the full credit they deserved.

I’m sure most know of the individual members’ accomplishments after the band split, however.  Oscar Dronjak of HammerFall, Anders Iwers of Tiamat, Jesper Stromblad of In Flames/Dimension Zero/The Resistance, and Markus Nordberg, who unfortunately never went on to do much else.  A shame, as he’s a killer drummer.  Their stuff was also impossible to find.  Until now, that is.

Century Media wisely decided to re-release their first album, "The Book of Truth", this year.  The entire album has been re-mixed and re-mastered, and the end result sounds fantastic, thanks to the infamous Fredrik Nordström.  This version sounds a bit punchier than the original, but done so without losing it’s gritty charm.  The songs are all robust and ridiculously potent, but really, this is common knowledge.  And if not, what is wrong with you?  No excuses now!

As if making this landmark album available again wasn’t enough, a loaded second disc is included.  What’s on said disc?  Only the two impossible to find demos the band recorded as Desecrator (before they changed their name to Ceremonial Oath) and the first demo released after the name change back in 1991.  That’s as comprehensive as it gets, folks.  Listening to these really brings one back.

To any fan of melodic death metal, metal historians, or simply those who dig metal done right, pick this up.  Chances are you don’t have an original copy (and if you do, you’re a lucky one), and Century Media has done a wonderful job with this package, which includes extensive liner notes, photos, and a bunch more cool stuff.  Lets hope that they give their second and last album "Carpet" the same treatment.  Lets also hope that the band plan on playing more shows after the Gothenburg Sound Festival (which also brought Gardenian back together) and Hellfest.  Pretty please?