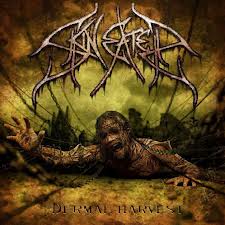 So-called "supergroups" seem to pop up fairly often these days.  A couple of dudes with pedigree from other successful endeavors collaborate, and bam, another supergroup!  Some are good, some aren’t so much.  One simply never knows.

Skineater is the latest of such groups to fall upon my always-open ears.  When you have members who have been involved in quality bands such as Carnal Forge, In Thy Dreams and Nonexist, it’s likely a good idea to at least give what they come up with a listen or two.  Low and behold, the band’s debut release "Dermal Harvest" is upon us.

What do we have here, you ask?  Skineater is a mash up of straight, abrasive death metal combined with some hints of mid 90s melodic death.  Very easy to digest, and the album is very tight and concise.  My only issue is that the songs can run together a bit and their overall sound is a tad on the generic side.

Tracks like "Your Life is Mine" and "Through the Empire" are more on the all out brutal side of things, while "Thousand Dead Faces" mixes it up with more melodies and varied songwriting.  More tracks like that is what this album really needed, as it displayed what these guys can do when they infuse more melody with the ripping stuff.

"Dermal Harvest" is a good album that shows a lot of potential.  The guys in the band are very capable, and the disc as a whole was enjoyable, but nothing to lose one’s proverbial shit over..  The repetitiveness brings the score down a bit, but there’s potential there.  If the band varies it up a little in the future, they’ll go a long way.  Check it out, regardless, as it’s certainly worth a legitimate chance.