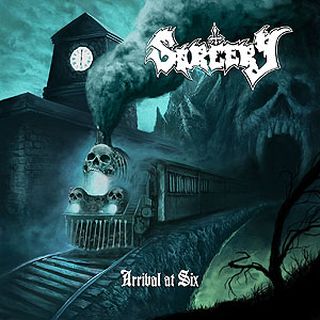 Sorcery are back! Are you sure? Is it not another swedish band who call them self Sorcery and play old school death metal? No, it´s the real deal! The cult band who released "Bloodchilling Tales" back in 1991 and then went under the radar since.

They signed with Xtreem Records and are now in focus again with their properly entitled follow up "Arrival At Six".  What about their music, is it still true swedish death metal ala early Entombed and so on? Yes, but this sounds more like "Wolverine Blues". Is it any good then? After a couple of spins I finally got into it, it took some time to adjust but now I really dig the album, both for the vocal and also for the intensity they deliver. It´s full speed agression with an intelligent way of conducting themself. It actually sounds very mature. What about the songs then? The songs are pretty straigth forward, not to technical but with a ton of said agression and the arrangements works pretty well. Production wise then, any complains? No fancy output, just pure old school metal, nuff said.

Will you recommend Sorcery to those who missed them back in 91? Yes, if you like "Wolverine Blue" you will for sure enjoy "Arrival At Six". Those who dont, go to school and learn to. This is metal music for the history books to come.