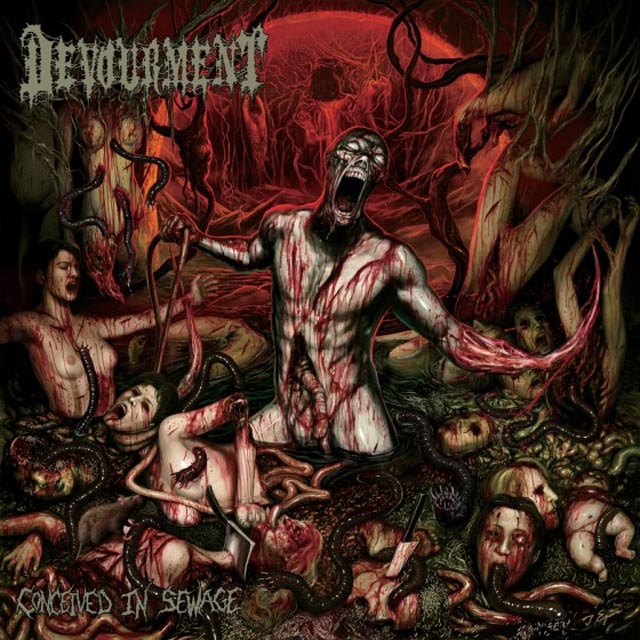 Devourment (US) delivers a mature, well played brutal piece of extreme metal and after multiple listens it only gets better every time.

Those who know Devourment from earlier may have differend opinions about the "masters" of modern slam death metal. Their debut, "Molesting the Decapitated" are so brutal and sick (just take a look at the cover) that the metal audience where somewhat stunned. The opinions are many on Devourments music and I can see why.

Personally I did much more enjoy their "Butcher The Weak" release from 2005 where the slamming where somewhat a litte more put in the backseat of the general sound.

Now, 2013´s "Conceived in Sewage" is a major step for the band regarding keeping the brutality in check and making more sense riffing wise. The slams and breakdowns are still there but not utilized as often as before. The lyrics are as sick as ever with song titles like Fucked with Rats and Carwed into Ecstasy they are not for the faint of heart. The vocal fits the music perfectly and this kind of metal can not be sung in any other way. By that I mean bruuuutal as f**c.

The production is very clear and works very good with the music that tears your ears apart during the half hour "Conceived in Sewage" spins. As mentioned earlier, the album grows on you and you´ll hear new aspects of technicality with every new listen.

If you´re into this kind of music, give Devourment a new chance, thats all I´am saying.