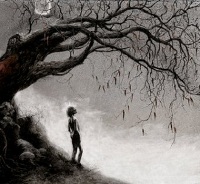 I first encountered this Finnish three-piece back in 2010 with the release of their very strong third album ‘A Collapse of Faith’, and was eager to see what the last few years had meant to the band in terms of sound and overall development.

‘The Plague of a Coming Age’ offers much the same fare as its predecessor – slightly depressive, shoegazing, introspective dark/black metal with a slight influence of nature. This is the type of music which could easily act as a soundtrack for a night under the stars with only the howling of wolves for company. Imagine yourself standing at a lake shore with the wind rustling through the rushes as the rain begins to fall… If there is one thing October Falls are good at, it is evoking a scene!

Another thing that grabs me about October Falls is the authority with which they write and present their songs. One can hear straight away that they are accomplished musicians and mature composers. ‘The Plague of a Coming Age’ doesn’t do a hell of a lot that its predecessor didn’t do, but it is just as accessible and the songs benefit from having a slightly more transparent structure while maintaining their ambient feel.

This is the perfect album for rainy days and as I write, grey clouds are coming in from the shore…