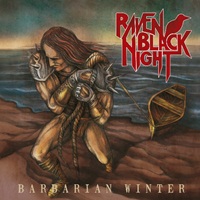 Forming in 1999, this Australian true/epic heavy metal band possesses a doomy veneer on their second album "Barbarian Winter". Guitarist Jim Petkoff handles the vocals, and his voice definitely will shake your foundation, an eerie warble with earth shattering high note propensity, one part Mark ‘The Shark’ Shelton, another part pure shrieking terror to the bone. Musically Raven Black Night evoke thoughts of Candlemass, Budgie, Rainbow, and others in that 70’s to 80’s scene of purity.

Expect a mixture of quick hitting songs like the early Savatage-esque "Fallen Angel" and straight forward "Morbid Gladiator" with longer, epic material such as the 9:23 title cut and closing gem "Angel with a Broken Wing". I will admit it isn’t the most instantaneous sound ever heard, and their interpretation of the Black Sabbath ballad "Changes" can be tedious to stomach due to the sustained note holding from Jim, he’s certainly no Ozzy Osbourne on this one.

Primitive production values circa early 70’s- right down to the fuzz box distortion guitar tone and natural drums- along with old school cover art (keeping things simple: a barbarian dragging his vessel to shore) ensures that Raven Black Night have set their sights into the more ardent followers of the genre. For my tastes "Barbarian Winter" will be an occasional listening experience, as I have to be in the right mood to handle their brand of epic metal with doom. As such, approach with caution.