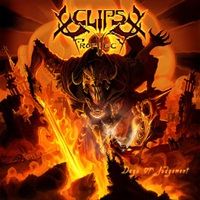 Metal has always been a mainstay genre in Canada. I think it’s a combination of the harsh winters, blue collar work force, and an appreciation for the arts that keeps the scene vital. International bands rave about their shows in major cities like Toronto and Montreal- and a natural development is the local crop of acts who wish to show their creative wares. "Days Of Judgement" is the debut full length from the Montreal progressive power metal quartet Eclipse Prophecy, who use a variety of North American and European influences to develop an intriguing sound.

Imagine if you will guitars and drums that float between a European power metal energy with galloping abound as well as some segments that recall Iced Earth with possible thrash intensity. Vocally guitarist David McGregor has a majestic, theatrical nature to his melodies that reminds me of classic Fabio Lione meeting up with a cleaner Hansi/ Blind Guardian. Drummer Landryx flexes his double bass hyper speed feet on "Through the Storm", which ends with a killer piercing scream that would make Mille/ Kreator proud. Fellow guitarist Martin Machado knows how to inject brightness in his lead breaks while also maintaining his arpeggio shred credibility- check out the opening to "A Dying World" or the solo within "Circle of Torments" for exemplary technique and feel.

Many songs possess that soccer stadium/ mead hall interactive element in the verses and choruses where you anticipate audience sing-a-longs: "Labyrinth of Sanity" with its minor keyboard chord additions and the straight ahead happy power metal oriented "Inferno" sure to be two long-term Eclipse Prophecy tracks in their set lists for years to come. Rounded off by a decent production (for a change bassist Karlos Marchado doesn’t get buried in the mix as some in this genre are prone to do), this album will appeal to those who like their power metal spirited and a little darker/ heavier at times.

Kudos gentlemen- proof there is plenty of talent lurking in Canada these days for metal.

LORDI – To Beast Or Not To Beast