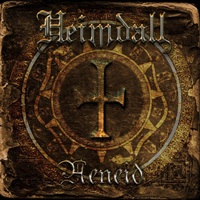 The Italian power metal act Heimdall returns with their fifth full length "Aeneid" after a nine year absence on the recording front- prolonged due to a four year break while the band searched for the right vocalist. Enter Gandolfo Ferro as well as guitarist Umberto Parisi, who join long term guitarists Fabio Calluori and Carmelo Claps, drummer Nicolas Calluori, and bassist Enzo D’Auria. The album conceptually tackles the Virgil saga, an epic poem that travels from the fall of Troy to the birth of a new state that later became known as Rome.

The double salvo of "Forced by Fate" and "Save You" project the album with this classic power motif: stirring my soul with a charge like the early Roy Khan led Kamelot years, the triple guitar attack exploring a number of harmonic and counterpoint elements for a thick sound. "Ballad of the Queen" maintains this symphonic meets mythological texture, Gandolfo digging deep into his lower range for a tender, restrained delivery perfect for the slow, centerpiece diversion to set up the second half of the record.

"Underworld" comes out firing with this keyboard lead and quickly hits my head in all the right places- a furious drum performance from Nicolas and off time guitar work during the verses gives this track a dramatic outlook that Heimdall lives for. "Hero" has that battalion power charge throughout, another cut worthy of Kamelot appreciators- and the symphonic mid-tempo "All Of Us" contains surprise elements with multiple background vocals of a higher and lower variety that makes this an album highlight.

Having not heard Heimdall since "The Almighty", "Aeneid" is a strong effort from the band. Exemplary performance and skill outweighs the obvious influence reference points- so if you desire dramatic power metal with a killer mythological concept, this record should be ideal.