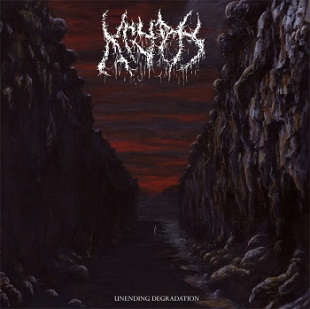 Krypts is the new wine. They taste deliciously evil and have that grim and dark aftertaste that triggers unholy water in your mouth. The finns are finally out with their debut on Dark Descent records and what a pleasing listening it is! "Unending Degradation" is a powerfull and nasty piece of old school death metal with nods to the early US east coast DM scene (yes, you know it perfectly well, Incantation is among them). Simplistic but not primitive, evil but not overly angry and the last but not least, well played but not technical. Their self titled EP from 2011 was just a teaser, this is the real deal and those who got in on that will for sure not be dissapointed. The production is murky and necro enough to drive chills down your spine but (to my pleasure at least) its also clear enough so that the set of massive riffing can enter your soul and start the process of tearing you down. The tempo is of course mid paced but not dragging. The intensity is there all the way so you´ll never get the chance to take a breather. The music performed never let you go during the 40 minutes the torture of "Unending Degradation" lasts and when its finally finished the addictive rush makes you just press play one more time. The torture is here to stay, thank god.