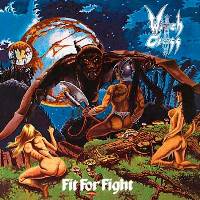 One great thing about a recession is that it seems to send record companies looking back in time for something they can polish off and present to the cash strapped record buying public, rather than spending a wad on a new band who may or may not make it. Ok, this is tough titty for new acts, but it means gems which were considered cult and extremely rare get another lease of life. This is good – both for oldies like me who finally have money to catch up on everything they missed back in their teens and for those who were still in liquid form when the originals came out.

‘Fit For Fight’ was originally released in 1984, back when Witch Cross’s countrymen Mercyful Fate were releasing ‘Don’t Break the Oath’. No prizes for guessing who got all of the attention heading to Denmark that year! But then the competition was tough all round that year – ‘Ride the Lightning’, ‘Powerslave’ and the ‘Last In Line’ all came out that year too!

Musically Witch Cross are firmly rooted in the NWOBHM – duelling lead guitars, plenty of melody and charismatic vocals that shoot from mid to high range. The drums plod along in a fashion quite characteristic of the genre at the time. At times they kind of remind me of Saxon. The lyrics have that slight epic feel and the cover artwork, preserved in all its ‘glory’ (heh heh) for the re-release evokes a world of sword and sorcery. For those who wish to immerse themselves in a slice of classic early 80’s metal, this is as authentic as it goes and well worth checking out.