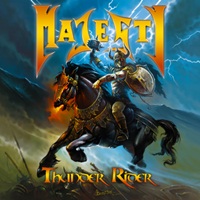 7 years beyond their last studio album "Hellforces", the German traditional metal act Majesty returns with "Thunder Rider", just in time for a killer European tour with Gun Barrel, Wizard, and Grave Digger. The foundation of the band’s sound contains a lot of Manowar power and sentiment, but I think they also include a fair share of power metal influence now from artists like Gamma Ray ("Warlords of the Sea"), Judas Priest ("Make Some Noise"), and Running Wild ("Rebellion of Steel").

Keyboardist/ vocalist Tarek Maghery has a husky resonance to his range, not as operatic as David DeFeis but works well within the straightforward riffing context his band mates employ. The closing number "Metal Union" lives up to its title, bringing together a host of guest singers from Crystal Viper, Wizard, Kissin’ Dynamite, Sinner, Ross The Boss, and Paragon for a 6:20 epic offering, the twin guitars from Bjorn Daigger and Tristan Visser signaling an anthem sure to evoke audience chants the world around.

There are a couple of tracks that seem to plod along in mid-tempo oblivion- with the drum work from Jan Raddatz on "Anthem of Glory" very pedestrian and slightly comical during a couple of the riff transitions and the swirling sound effects for "New Era" best left on the cutting room floor. Overall though, "Thunder Rider" contains enough German class in the soloing and energy department to keep most consumers coming back for more.

Besides, the cover art will not disguise what to expect from Majesty- behold the glory of metal, warriors, and fantasy. If you miss traditional metal with power nuances and a strong affiliation to the Manowar discography, "Thunder Rider" is another album to add to your collection.