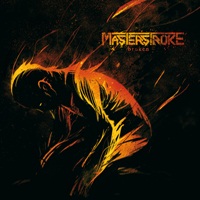 Sometimes being brief works wonders when explaining the facts regarding a band. Case in point: Finland’s Masterstroke. The last few years between albums on their official Facebook page get this explanation: 2010- some gigs in Finland, 2011- some gigs in Finland, studio & a little break. 2013- fourth album "Broken". And as such, this 8 song record may seem quick with its shorter 35 minute and change running time, but I truly believe its energy and diversity will draw a wider net of people to the quintet’s style.

In comparison to their previous discography, the opening strains of "The Eye" showcase a deeper, modern edge in terms of bass and guitar tone- along with the passionate vocal prowess from guitarist Niko Rauhala. It’s as if Masterstroke took their power/ traditional meets semi-progressive metal template and studied a little bit of solid songwriting constructs from acts like Nevermore or In Flames. Keyboardist Jussa Kulomaa may not play a major role in terms of a front and center instrument standpoint, but his accents add atmospheric impact in cuts like "I Condemn You" and the driving, energetic "As We Crawl" (Nevermore meets Meshuggah/ Machine Head here). My favorite cut would be the 5:57 mid-tempo "Reborn in Flames"- a series of riffs that capture the right melody/ hook balance in a similar fashion as Mercenary.

Coming from more of a Rainbow/ Iron Maiden framework on their earlier efforts into a sound that is definitely darker and more Americanized can be a tumultuous affair for many listeners. Masterstroke as a unit balance that delicate line between creative freedom and commercial leanings, and as such "Broken" could be one of those hidden gems that connects with more people as the years go by.