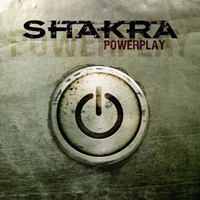 A staple in my listening diet is meat and potatoes melodic hard rock and metal. Since my days of youth I’ve become accustomed to the sound of a solid guitar riff wrapped around a crushing drum tempo and powerful singing up to the challenge of bringing the energy level to high. Switzerland’s Shakra has been one of the bands in this genre that deliver the goods album to album- with rarely a shift in terms of the album’s sound. Considering the positive feelings I have for 2009’s "Everest" and 2011’s "Back on Track" (the latter their first with latest vocalist John Prakesh), expectations of a similar sort came when I received this 12 song, 47 minute plus platter.

This ninth studio record "Powerplay" does throw in a darker, modern element at times that could please newcomers while sending some of the ardent Shakra followers running for the exits. The opening riff for instance on "Life Is Now" is very post-grunge influenced (think Alter Bridge meets Shinedown), while the vocal melody is something I would expect from Def Leppard- and didn’t set a good tone for the record. The follow up "The Mask" continues with another staccato-laced guitar arrangement, yet the vocal and chorus parts keep the song in a better direction and more in line from what people love about the band. As the album progresses though, the classic streamlined hard rock we’ve come to know and expect a la Gotthard, classic Dokken, and Pink Cream 69 shines through on the dirtier "Dear Enemy" and 1-2-3-4 oriented "Stevie"- as well as their tender ballad work on the half acoustic guitar/ piano, half electric laden closer "Too Good to Be True".

Exquisite soloing from Thom Blunier (bluesy and quick on "Higher", emotive and breath-taking on "Dream of Mankind") and a versatile mix of arrangements and dynamic feel makes "Powerplay" intriguing to say the least. Time will tell if Shakra will continue to balance the tried and true with modern aspects, but for now it’s a welcome change in their arsenal that could allow more of a mainstream appeal in many countries.