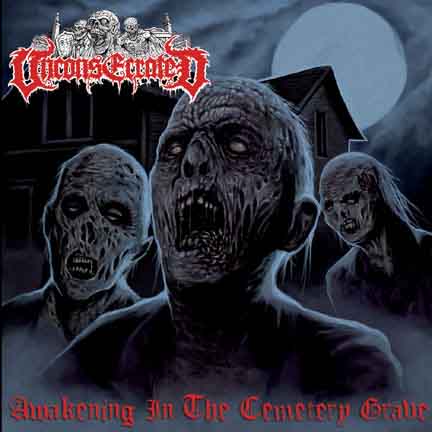 UNCONSECRATED – Awakening in the Grave

Unconsecrated hail from Spain and "Awakening in the Grave" is a compilation of various demos and EP’s since their inception back in 2006.

Personally I had never heard about this band before it dumped down in my inbox some time back but I can see on the world wide web that they have quite an following and their  EP from 2010, "Slave to the Grave" (included here) got some pretty good reviews back then.

Unconsecrated plays old school swedish death metal in the veins of early Entombed and Dismember but with a little twist, especially in the vocal department. This is not something new but a tried and well tested formula that they manage to pull off in a fairy cool manner. The production also sounds retro but its still clear and quite enjoyable to listen to and that makes the melodies more prominent. The songs tend to follow the same pattern all the way and when there’s 17 songs to digest I got fed up at the end of the second listen. They do deliver crunching riffs with a vocal a little bit darker than the bands mentioned above and that is a plus but still not enough to take it all the way. "Awakening in the Grave" is a straight forward vintage death metal compilation that takes back in technicality what it lacks in originality. This is for some often more than enough (inc yours truly) so I can recommend this to the seasoned death metal head who has knows every solo on "Left Hand Path" and "Into The Grave" and craves for something new. The rest can start with the albums listed above.