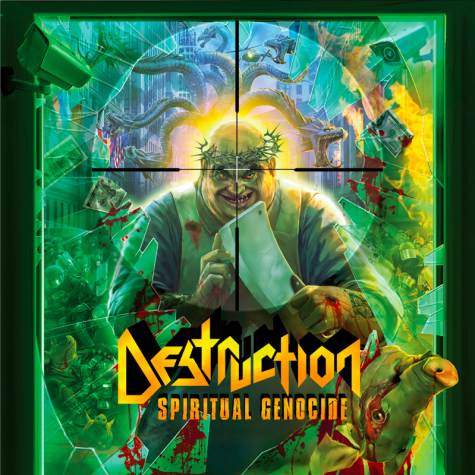 Destruction was one of my favourite bands back in the early days of German thrash. What I liked most about them was their raw, chaotic approach. ‘Sentence of Death’ is the release I go back to most, because it captures Destruction at their most unhinged and chaotic. ‘Infernal Overkill’ was a classic too, featuring the monstrous ‘Bestial Invasion’. However, after ‘Eternal Devastation’, the band suddenly started having much better production, introducing that chunky guitar sound they still have today. Plus by that stage everything sounded so much tighter that most of the messiness that had attracted me to the Teutonic trio had been washed away. And so, I stayed away from the band’s new material for over 20 years. I checked out a glowing review for ‘Spiritual Genocide’ a while ago and thought that this was the ideal time to see what the guys were up to.

I have to say that I am both pleased and saddened to have to agree with Jørgen’s opinion on ‘Spiritual Genocide’ (see below). While there are some good moments here, there is nothing to make this an indispensible release. Opener ‘Cyanide Dreams’ has a bit of promise, but as we progress further through the tracks we find that the spark of insanity, the feeling of pushing things to the edge, is not present. And secondly, although there are lots of good ideas here, there are very few great ideas. Probably only for the core fans this one…

LORD OF THE GRAVE – Green Vapour