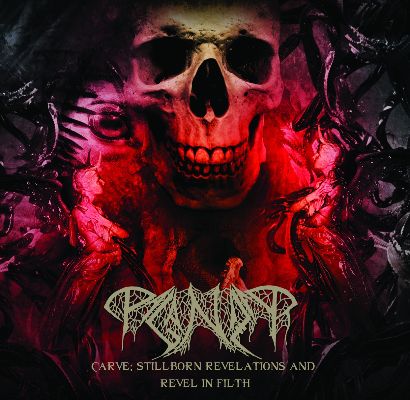 This compilation is actually the two releases Paganizer did when Paganizer was on hiatus and recorded under the moniker Carve.

Rogga Johansen & Co put Paganizer on ice for a couple of years and released (with almost the same lineup) "Stillborn Revelations" and "Revel in Human Filth". Music wise its Paganizer and the formula is as you may know pure death metal.
How Rogga manages to record and produce the massive amount of albums as he does is beyond me but he always make sure that his releases keeps some form of death metal quality. The same can be said about this compilation. Heavy distorted guitars with a vocal to fit is nothing new but the material is quite good. Its not revolutionary but follows the known true path we may describe as old-school. The production is dark and I really like the sound, especially on the drums. They don’t have that hollow sound that to well produced drums often have. The lyrical content is no surprise, death, death and more death but its delivered quite convincing and even after a couple of spins it still fits well to the overall sound.

"Carve, Stillborn Revelatoins & Revel in Human Flesh" may not vary much or do things outside the box but I as said, I like it even after a couple of spins and its going to get some more time on the speakers for sure in the future.

In short summary this compilation of Carve’s two albums contains 21 songs in the vein of Paganizer (and even releases under the Paganizer logo) so if you know Rogga or Paganizer from before this can be of interest to you, both from a musical and historical point.