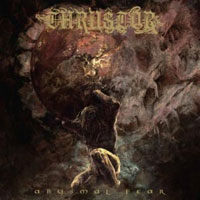 The Sardo brothers may not be well known to the mainstream metal scene, but those who love the 80’s underground tape trading circuit know all too well their impact on the California scene. Their appearance on "Metal Massacre 4" from Metal Blade with the band Sceptre included future Agent Steel vocalist John Cyriis- then known as John Camps and playing guitar. That band would mutate into Sardo, becoming faster with a more brutal overtone that helped the scene naturally evolve. Now Thrustor is the main band for vocalist/guitarist Phil Sardo and his bassist brother Tony, along with newest drummer Tomasz Pilasiewicz- residing in the Chicago, IL area and taking on an aggressive form of thrash metal with slight blasting death/ technical overtones on this second album "Abysmal Fear".

Musically the 10 songs appear to toe the line of their California roots with heavier overtones- artists like Forbidden, Metal Church, Sindrome, and Nevermore come to mind the most when taking in winning cuts like "Into the Blackest Hate", the moodier "Burnt Offerings", and killer double bass/ stop and start riff action monster "Brutal Assault". Phil employs an imposing vocal stance- clearly audible but will never be mistaken for the Chuck Billy or Joey Belladonna’s of the world- it’s more of a half talking/ half aggressive manner that gets the job done valiantly. It is interesting that the album delves deeper into the technical chops towards the second half- with "Screws to the Skull" being one of those head turners in terms of Tomasz fleet snare rolls, Phil’s twisted riff endings and squeals and Tony having to keep up with the proceedings at hand.

I know this is a style that appeals more to the musicians at hand than the average consumer- but I think Thrustor could be worthy of your time if you are looking for a left of center thrash band. These veterans of metal still have what it takes to be creative and viable in 2012.