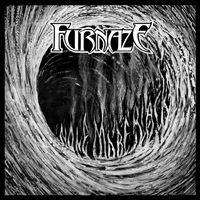 It’s very refreshing when other power/thrash musicians make band recommendations for your reviewing enjoyment. Guitarist /vocalist Krimson of the three piece UK thrash act Furnaze sent this album "None More Black" due to my correspondence with Charly from Paradox- showing the networking aspect that keeps the metal movement alive and kicking from generation to generation. It’s always a pleasure to turn on listeners and readers to newcomers- and rest assured that with this 12 song album, I expect this trio of musicians to make an upward climb in the thrash ranks.

Combining the shredding chops and heads down crunchy riff template of the Bay Area scene along with the extremity and pure sonic aggression coming out of their own European movement, songs like "Breathe in the Fire", "Anger Flow", and the guitar harmony juggernaut "Fight" should induce massive bouts of sweat dripping from audience members as they whirl about to this set of songs. Krimson’s main vocal attack is one of acidic sandpaper in a mid-high register- almost the UK equivalent of Mille from Kreator with a touch more clarity. Furnaze share a lot in common musically with similar influences of Germany’s Paradox: elements of Forbidden, Heathen, Artillery, and Metal Church come into my mind as far as their technical ability, strong variance in drum tempos- and even the flair for a power march that takes "Unbound and Underground" to become one of the highlights of the record.

Another band who take the old school late 80’s sound to modern heights- Furnaze appear to be as fun on stage as they appear on record. "None More Black" as a second album is killer, proving that you can be melodic and fluid with your technique while also tearing apart bodies with thrash from limb to limb.