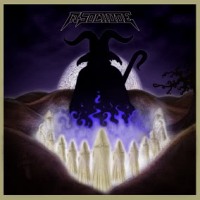 This first outing for these Swedish classic metallers received heaps of praise when it was originally released back in 2008, quickly selling out and ensuring that it retained a cult status. Now, for 2013, Season of Mist are putting it back out with 2 bonus tracks so everyone can have a chance to check out what all the fuss is about.

In Solitude are children of the NWOBHM. Doubtless, they’ve had numerous comparisons to Mercyful Fate too, and will have many more before their career runs dry. It is probably a fair enough comparison except that the vocals aren’t similar at all. What impresses most about ‘In Solitude’ is how many tricks these guys have up their sleeves considering their age and relative lack of experience. Vocalist Pelle was only 16 when this album was recorded, but he sounds like he is in his 30’s and has been doing this for years. And, if the reports are true, his stage presence says the same thing.
This is one of those albums where the band seems to do nearly everything right, but still doesn’t manage to make that transition to greatness. One of the problems for me is the vocals. Yes, Pelle can hold a tune, but since everything he does is mid-range we miss the contrast that a Geoff Hate/Rob Halford/John Cyriis/King Diamond-style vocalist would have bought. Secondly, although plenty of songs are up tempo and the writers have written plenty of ‘impact moments’ into them, the energy of the band feels a little muted, as if it was lost in the recording or mixing process. Or perhaps, that is once again attributable to the vocals. Difficult to say, but it detracts subtly to the overall effect.
Having said that, this release has plenty of memorable riffs and great melodies and will please, if not completely overawe fans of the genre.