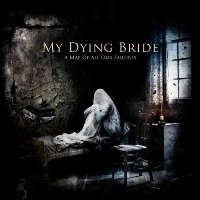 Over 20 years strong and with a dozen full-length albums under their belt, pioneering doomsters My Dying Bride return with the follow up to 2011’s ‘The Barghest o’Whitby’ EP. So will it be a Christmas Cracker or a Crock of Shite? Let’s see!

From the start, I have to admit that I’ve always had a bit of a love/like relationship with this band. Back when I first heard them in the mid 90’s, I was struck by the originality of their approach and their complete commitment to their brand of languid, melancholic doom. Whatever you feel about this band, you have to admit that they have one of the most distinctive and characteristic voices in the scene. But there were things that kind of turned me off them a little. Firstly, there was the complete lack of speed. I compare the pace at which their songs unfold to talking with an old man who keeps stopping to get himself another whiskey or to roll a cigarette. Yes, it is atmospheric, and it is part of the way MDB work, but you just want them to get on with the story and sometimes the impatience overcomes me and ends me racing back to some flat-out black metal. I always believed tantric sex sounded shit – just come and go, if you know what I mean. So perhaps it is fair to say that MDB are not the best band for impatient listeners like me. Secondly, I sometimes find their maudlin, self-referencing lyrics to be a bit adolescent. I mean, isn’t there a point when people grow out of their teenage depressions and start getting a more balanced view of the world around them?

Ok, so almost three hundred words into a review where I complain about a band being a little too circumspect for my liking and I still haven’t said a word about the latest release. Guilty as charged!

As soon as the first chords of opener ‘Kneel Til Doomsday’ bleed from the speakers, it is obvious that MDB mean business and have pulled out all of the stops to make ‘A Map of all Our Failures’ the very best release possible. The sound is heavy, with plenty of bass. Once again, MDB have gone for a layered resonance, but this feels more like an effect of their compositional approach rather than just piling sixteen tracks of guitar on top of each other in the studio. The result is that the production is nuanced and atmospheric, without being so polished that it loses its edge. In terms of song-writing, there isn’t really anything fans of the band won’t have heard before – gloomy, gothic tinged doom with plaintive violin and despondent vocals, same as ever. I suppose the difference this time around is that the whole thing is more consistent that many previous MDB releases, and that some of the better tracks really do stand out as equal to the band’s best yet. ‘Like a Perpetual Funeral’ is particularly noteworthy for its memorable chorus. Ok, so it does take a long time to get there, but the song dynamics have been well-crafted so the listener stays involved. The narrative of ‘A Tapestry Scorned’ makes for compelling listening too as it unravels a ghost story that will delight fans of Poe.
Ultimately, ‘A Map of all Our Failures’ is a convincing offering and more patient listeners and fans of the band will find it a worthy voyage.