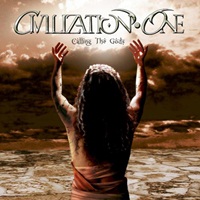 The second album from melodic power metal quintet Civilization One finds a few member shifts as well as a label change- so fear sets in when three-fifths of the lineup receives a re-boot. In the case of these musicians, it was necessary due to proximity and related productivity. Enter drummer Michael Stein- who also plays with vocalist Chity Somapala in Red Circuit, along with new guitarists Oliver Marmann and Nicklaus Bergen. What does the mean in terms of sound relative to their 2007 debut "Revolution Rising"?

For one, the emphasis on these 12 songs (plus brief "Aazis" 54 second intro) appears to be on a more lively, easier to replicate sound than the multi-tracked vocal harmonies and waves of keyboards lurking in the shadows. Chity is an affable front man- professional and more than capable of keeping the melodies versatile and memorable: be it in a lower / mid-range capacity for the commercial leaning "The Land In Flames", the more heart-tugging ballad "Reunite" or his potent lung capacity for the conventional double bass driven number "True Believer". Oliver and Nicklaus perform to high caliber standards: challenging the listener with many dazzling lead breaks and a mixture of riffing techniques that combine crunchy, almost thrash-like parts in "The Supernatural Virtue" as well as standard Firewind meets Brainstorm guitar hero work on the title cut and "Hell Awaiting". Many will even smile at the Phil Collins/ "Take Me Home" laid back percussive aspect of closer "Dreams of Fire"- once again illustrating the band’s desire for individuality.

Another aspect I enjoy is the shorter time frames for the twelve songs: proof that you can cut to the chase, provide the level of energy and excitement, and move onto your next arrangement in a tidy 3-4 minute measure. "Calling The Gods" is a proper follow up to its predecessor, which is always a great move in today’s crowded power metal sweepstakes. Those on the fence after their five year layoff will be adequately appeased.