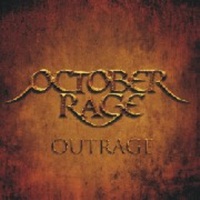 This Aussie quartet came to life in 2008 with brothers Nick and William Roberts- the former handling guitar and vocals with the latter on bass. Rounding out the current lineup with guitarist Josh Gilbert and drummer Alan Toka- "Outrage" is the debut 12 track, 44 minute platter that could teach a lot of upstart American modern hard rock acts a thing or two about driving melodies, addictive guitars, and all around good times.

Imagine the best of Sevendust, Shinedown, Alter Bridge and Nickelback rolled into one and that’s what you get with material like "Set You Free", "Wayside", and "Two-Sided Blade" among others. Studying the nuances of hitting that core hook early and often, Nick’s voice has that right resonance with Southern rock emotion and arena worthy power- the ballad "Into the Night" a highlight that in another time period would have easily been a top 10 global smash hit, filled out with a gorgeous string accompaniment.

I hope that October Rage explore their dual guitar harmonization, as this could be an aspect that separates them from the pack. The low slung, heavier feel of "Rain" contains a killer main refrain with just the appropriate amount of rack effects that makes your body sway with the rhythm. The production seems to leap off the speakers, with a plug in and play philosophy that allows the listener to engage ear to ear with the performances on display.

This isn’t change the world music- it’s stripped down and meant for immediate enjoyment and impact. Help October Rage realize their goals to influence more audiences around the globe with these tracks. Rumor has it the follow up will be heavier- I already think "Outrage" is a more than amazing start.