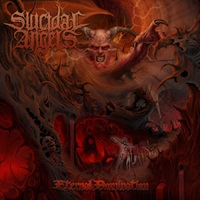 Great times indeed for this Greek thrash band. Numerous plum support slots with some of the biggest acts in their genre: Kreator, Death Angel, Exodus, Cannibal Corpse, and Behemoth to name just a few, along with 4 albums released that continue to fuel the fervor for the quartet. While the bootleggers abound putting out sub-standard versions of their hard to find debut, NoiseArt Records and the band decided to re-release "Eternal Damnation" now- offering the regular version as well as a digipack double disc with their "Bloodthirsty Humanity" compilation and "Armies of Hell" EP from 2004 and 2006 as a bonus.

As to be expected from a young band with their first release, the 11 songs on "Eternal Damnation" don’t leave much room for breathing: expect heads down, fast and furious thrash done the way a lot of German acts like Kreator and Sodom delivered in the mid 1980’s. Some of the down picking, stop/ start riff nature and bombastic double bass drumming/ lead work in songs like "Slaughtering Christianity" and "Evil Attack" come straight from the Hanneman/ King school of frantic tradeoffs. There’s something about the blitzkrieg cymbal / fill work of drummer Orpheas Tzortzopoulos that re-lives that youthful exuberance you heard from Ventor, Igor Cavalera, or an early Dave Lombardo.

Venom-filled vocal lacerations from guitarist Nick Melissourgos match the razor sharp rhythms on personal favorites "Sacred Prayers to Expiation" and "Screams of Homicide". It was obvious from the start Suicidal Angels wasn’t going to be a band lost on the new generation clamoring for thrash- and this album brings you back to their early years to know where their hearts and influences come from. Strap on your battle gear- you’ll never be the same from the blistering and battering of Greece’s finest thrash export.