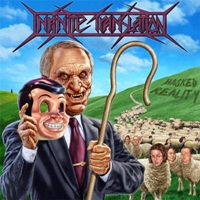 Starting in 2004, the French thrash quartet Infinite Translation worked on their old school sound, releasing their debut demo "The Anger Of Gods" in 2006 and eventually recording their debut album "Impulsive Attack" in 2010. "Masked Reality" is the follow up full length, a 9 track, 38 minute plus offering sure to please those into mid-tempo to fast guitar riffing, equally engaging lead breaks with melody and technical flair, and a speedy vocal delivery with the shouting gang choruses very well known to those who have been into thrash since its inception.

Sacrifice, Exodus and Dark Angel probably come to mind the most musically- while the vocals from lead guitarist Max Maniac have a twinge of that rough and tough crossover appeal in a Rob Urbinati meets John Connelly way. The trademarks of the late 80’s thrash scene are prevalent: the instantaneous face melting riff, the drumming that races away, all to stop on a dime with the next riff transition as Max has the challenging task to push all of his word thoughts into verbal bursts at the same frantic pace as the arrangements.

While the first three cuts whirl by with bullet train speed, "Killing Solution" at least spends the first half of its 5:34 time frame engaging in a mid-tempo pace, almost like a militant march preparing the listener for the impending battle- for which the second half leads the charge as drummer Fish Killer slice and dices his kit as you need for ideal thrash. "I’ll Love You Dead" the follow up takes the opposite approach, the bridge containing some serious pit worthy riffs while the triplet action occurs above and below- Max almost tripping his tongue in the process while letting out a few blood curdling high screams.

Those who want obvious breakdowns or ballads need not apply. Infinite Translation is out for blood, ready to strain necks in all areas of the globe. "Masked Reality" should give the new breed of thrash a run for their money- and re-inspire the old brigade.