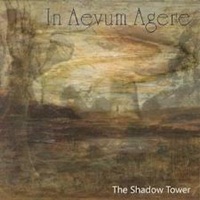 A side project for Annihilationmancer’s Bruno Masulli, In Aevum Agere is a power/ doom metal band in every classic sense of the word with this debut album "The Shadow Tower". Filling out the trio is lead guitarist Marco Ruggiero and drummer Andrea Cannata, as Bruno handles the bass, rhythm guitar and vocal duties. The 11 tracks on this record evoke the sound, spirit, and old school energy of Messiah-era Candlemass and early Solitude Aeturnus, with Bruno’s range very similar to Messiah Marcolin- especially in terms of sustaining a lot of lower trailing notes in the title track and "Act of Faith".

Musically the tempos fluctuate between conventional slow plodding movements and the occasional semi-up tempo offerings, which probably explains their power ties in tracks like "Leave Me Alone (Sinite me Solum)" and the triplet fueled headbanger "Ire of Solitude". Marco’s lead style is a mixture of neo-classical finesse and emotional tenderness, often holding one note to wrench out every last melancholic moment in the measure at hand. Closer "Son of Unknown" even has an aggressive opening riff stance not dissimilar to the early "Show No Mercy" days of Slayer- Bruno putting in his best vocal performance as his voice rises and falls with that operatic meets metal touch.

Given Candlemass’ retirement from studio activities- and who knows when the next Solitude Aeturnus studio album will hit the market ("Alone" came out in 2006), In Aevum Agere could slide in very nicely if you live for this style of power/doom. Bruno showcases attention to detail and succinct arrangements (at least for doom, on average clocking in at the 5:30 mark), so let’s root for this act to gain a buzz as we could use more material in the doom genre of this high quality.