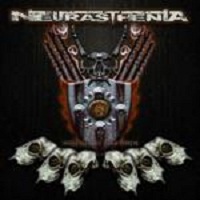 NEURASTHENIA – Possessed By Your Omen

A compilation of sorts from two previous albums, demo recordings, and a cover of Kiss’ “I Love It Loud”, this 11 song record “Possessed By Your Omen” comes from the Italian metal act Neurasthenia- who seem to straddle the fence of power and thrash based on my ears. Many of the faster sections within “I’m Walking With A Zombie” or “Screaming Corpse” follow the picking attack of Sepultura or Megadeth with the occasional trailing guitar squeal or bend like Machine Head and Pantera.

Occasional use of keyboards for orchestral maneuvers gives material like “Your Omen” that much more of a chilling impact before the guitars race away with shredding speed and the rhythm work keeps things tightly thrashing away. The only misstep the band takes is on the Kiss cover- a left field choice that Neurasthenia attempt to give more of a metal groove, but it just sounds like a disjointed, chaotic mess with the sub-par vocals and riffing mixing like a poor cement truck.

If you love a good mix of early 90’s thrash with slight power groove, “Possessed By Your Omen” should slot adequately into your listening palate.