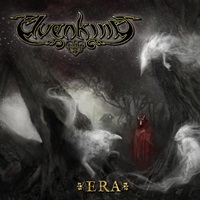 The sixth album from Italian melodic power/ folk metal act Elvenking "Era" continues to position the group uniquely, with their willingness to cross borders for the sake of individual sonic development. This particular 12 song outing appears to have the sextet incorporating heavier, slightly melodic death terrain on certain tracks- yet still delivering the crowd pleasing choruses, violin bursts, and folk elements that should get the audiences abuzz.

There are obvious commercial aspects to "Midnight Skies, Winter Sighs" that sound like Edguy meeting Skyclad in a back yard, Damna’s melodies very inviting for sing-a-longs. The follow up is the 1:45 "A Song For The People", a pure folk song with a stirring acoustic guitar and violin duality against serene female/ male vocal parts that often mirror the cultural proceedings. The faster, melodic death elements come into focus during "Walking Dead" or opener "The Loser"- especially with the guitar structures of Aydan and Rafael along with the propulsive, versatile drumming from Symohn. Elvenking also excel at the power ballad with "Forget-Me-Not", the vocals having an AOR twinge while there is a balance between the acoustic, electric, and piano/ keyboard instrumentation that half way through picks up the rhythm pace allowing for a terrific, almost theatrical solo segment.

In comparison to their last two studio albums, Elvenking have appeared to stretch the heavier material in that terrain, while also exploring more of their folk influences on tracks like "The Time Of Your Life" and the aforementioned "A Song For The People". What could this mean for long-time Elvenking followers remains to be seen- but the open-minded will probably embrace "Era" more than the staunch people who prefer their acts to stick to the tried and true with their style.

I’ll place "Era" in the potential column for my listening tastes.