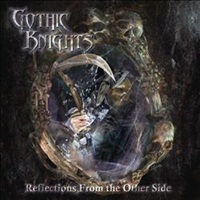 GOTHIC KNIGHTS – Reflections From The Other Side

The fourth album from New York City veteran power metal sextet Gothic Knights comes nine years beyond their last effort "Up From The Ashes"- one that seemed to be met with mixed response from the fans and critics as original vocalist Rick Sanchez returned to the fold. Taking the time to set up their own recording studio and severing ties with Limb Music means "Reflections From The Other Side" appears to have Gothic Knights back on track vocally, musically and lyrically.

The first thing I notice about the new album is this darker attention to proper metal tone in terms of the guitar and drum sounds. You can feel this sense of adrenaline coursing through songs like "Lord of the Underground" and the harmony infused, slightly thrash-oriented "Writing on the Wall" that proves these musicians aren’t resting on past accomplishments and still have vitality left 22 years after their initial development. Keyboardist Jared Sloan accents the right segments of the album, especially with traditional Dio/ Sabbath/ Savatage class- most notably on the evil "1689, Trial Of The Witch" and shorter, haunting "Ave Satani" where background choirs and the slower, whammy bar lead work blends perfectly against his classically propelled piano parts.

With over 66 minutes of material to take in, worry sets about that it’s a case of information overload for the brain. Gothic Knights make sure that they vary the pace between straight ahead power numbers and arrangements that are a little more epic, dramatic, and full of vigor- "Scythe Denied" and closer "The Omen" two of my favorites in the entire history of the band’s already impressive song catalog. The latter has many of those hooks and melodies that made Maiden famous with "To Tame A Land" and "Seventh Son of a Seventh Son" between the bass play, multi-part vocal harmonies, and searing guitar work.

Those into Jag Panzer, Mystic Force, classic Iron Maiden, and Helstar will love "Reflections from the Other Side" as much as I do. Rick delivers a top notch vocal effort, and guitarist John Tzantis deserves kudos on his songwriting chops with this one. Welcome back Gothic Knights- US power metal still reigns supreme due to your efforts!