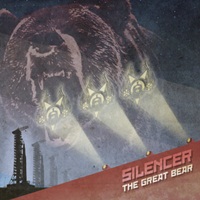 Another act I’ve been fortunate enough to take in since their early unsigned days is this Colorado metal band Silencer. On this latest release "The Great Bear", the quartet appear to be reaching back into the past a touch in terms of riff inspiration- using some of the 70’s and early 80’s straightforward hard rock acts as a template for this 11 track outing. Conceptually tackling the United States/ Soviet Union space race from the 1950’s and 60’s from the Soviet perspective, I love how the story unfolds through the lyrics and audio samples- with the music becoming very propulsive and attacking when called for, but introspective and reflective at other times as well.

Guitarist Keith Spargo helms the vocals again- and his clean, commanding presence mirrors the best Burton C. Bell / Fear Factory years on instant appeal material such as the winding "Light" and thrash-oriented "I Am Thunder!" The title cut has a heavier Black Sabbath swing to it, I love the lower bass chug from Patrick Russell and equally doom-laden drum chops from Alex Simpson on this, as Keith and fellow guitarist Dan Lynn weave in some quick double harmonies. The two part "Star City" offers the broadest dynamic spectrum, crossing many of the older, streamlined 70’s influences with quieter, darker Pink Floys-like parts that build up the tension from riff to riff.

"The Great Bear" comes at a great time in Silencer’s career. The band prove they have instinctual feel to offer metal fans a broad palate of emotions- expanding their early power sound and latter day thrash basis into something distinctly their own. My only complaint would be its rather quick 31 minute timeframe- when something flows together this well, you hope for a couple more tracks.

If Silencer’s goal is to create their own "2112" or "Operation: Mindcrime" for their fans- "The Great Bear" chronicles the right way to develop a concept record in modern times.