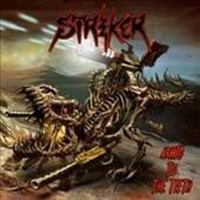 Edmonton, Canada: best known in my mind for sports hockey legend Wayne Gretsky and the Oilers winning the NHL Stanley Cup five times from 1984-1990. The quintet Striker hail from these parts, and on this second record "Armed To The Teeth" unleash their take on the traditional power metal movement.  Immediacy exists with the high pitched vocal acrobats from Dan Cleary as well as the dual guitar harmonies, buildups and lick/ riff tradeoffs from Ian Sandercock and Chris Segger- giving songs such as "Forever" and "It Could Be Worse" instant head banging, fist waving appeal.

The influences Striker draw from are wide and vast: elements of their solo abilities come from fellow Canadian act Annihilator as much as from say Saxon or Judas Priest- the riffing and rhythms in the bass/drum arena travel the spectrum of Helloween to Iron Maiden to the late 80’s/ early 90’s Vicious Rumors time period. Most of the material is at least of a mid-tempo anthem to slightly speedier variety- with loads of twin harmonies punctuating at all the key moments for better retention. The choppier songs where drummer Adam Brown gets a chance to flex his double bass feet like "Land Of The Lost" and "Feed The Fire" have more of an old school speed feel, with Dan’s Bruce Dickinson-like range giving the listener plenty of heroic parts to treasure. The band keep the songs lean and mean- 10 songs in 40 minutes and all the galloping riffs, sustained trailing notes, and calls for brotherhood you would come to know and love with this style.

Given the rebirth of thrash, could it be time for a traditional revival as well? I would say along with Skull Fist, Striker state a rather impressive case that with the right spirit and spunk, Canadian metal still has a lot of life left in the collective tank.