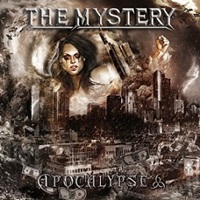 One thing I’ve learned studying the metal genre I hold near and dear to my soul- certain countries revere familiar styles no matter what may be fashionable, trendy, or overwhelmingly popular. Germany may be the mecca of metal due to its long history to support the movement in its infancy, and no matter what seems to be the newest twist, traditional power acts still get adequate support.  The Mystery for example hail from Northwestern Germany, starting in 1996 and self-financing two full length independent demos before releasing two albums- with "Apocalypse 666" their third and latest.

With a new female singer firmly in place (Iris Bonanta who also plays in an all-girl AC/DC tribute band Black Thunder Ladies) , the quintet mix up their influences from old school NWOBHM to their own domestic European contemporaries, as well as a love for the US power scene- the result being a strong traditional effort aimed squarely at the streets with a blue collar, working mentality. It’s not really shocking that Iron Maiden factors in the melodies and musical landscape for The Mystery- but one can also hear elements of "Thundersteel" era Riot, Fifth Angel, older Rage, and Vicious Rumors in killer tracks like "Cashgame", "Blackened Ivory", and the title track. Occasional uses of computerized vocal effects on "Nailed To The Cross" enhance the power riffs and Iris’ Bruce Dickinson-like melodies- while the rhythm section of bassist Christian Jesko Ruther and drummer Daniel Kahn hustle and bustle to keep the arrangements exciting.

Guitarists Alex Thunder Martin and Stefan Weitzel power through their individual parts and team up well like the best Downing/Tipton and Thorpe/McGee lineups for instant headbangers like "Ride On" or the Maiden-esque "The Great Escape".  With proper mixing and mastering from the experienced Markus Teske who has worked with Firewind, Vanden Plas, and Mob Rules among others, "Apocalypse 666" is quite an engaging, entertaining traditional power effort- sure to please those long in the tooth with the genre.