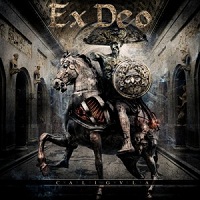 In an unusual twist, a side project contains the same members as the main act- as the six piece symphonic/ epic death metal band Ex Deo normally rip things up with the hyper blast Canadian group Kataklysm. Reaching back into ancient Roman themes for their lyrical topics (and wardrobe), the second album “Caligvla” relies as much on keyboardist Jonathan Lefrancois-Leduc and his layering of sounds as the normal epic songwriting, twin harmonic guitars and the dramatic vocal approach from Maurizio Iacono.

Overall these 10 songs plod along with a mid-paced to slightly faster tempo, and I felt that a lot of the solo work in the Metallica-esque “Police Verso (Damnatio Ad Bestia)” is well thought out and delivered. Cultural riffing mutates into dramatic turns, as you feel like you are transported back in time. Love the concept, not so keen on the execution- it’s very similar to territory well explored by Amon Amarth over the past decade.

Would be cool to hear at Renaissance Faires, otherwise “Caligvla” is best left to pasture as Kataklysm offers the better original option for these members.

NEURASTHENIA – Possessed By Your Omen