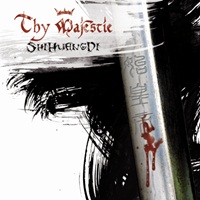 It’s exciting to watch the progress of a band album to album- especially if you are fortunate to chart said progress through your journalistic endeavors. Starting in 2000 with their debut album “The Lasting Power”, Italy’s Thy Majestie has evolved from a more symphonic oriented metal act to one with power and progressive elements, shedding a lot of their early theatrical affinity for a very potent and explosive style that has won audience and critical acclaim.

For fifth album “ShiHaungDi” we have another new vocalist in the fold- Alessio Taormina – who also sings for Crimson Wind. It’s probably a little frustrating to make forward progress when this is the sixth vocalist for the band in their fourteen year existence- but the rhythm section has been consistent since 1999 for bassist Dario D’Alessandro and drummer Claudio Diprima, and I think as long as the creative minds and hearts remain on the professional songwriting and performances, Thy Majestie will continue to impress.

A concept album around the life and times of Chinese emperor Qin Shi Huang who reigned the unified land in 221 B.C., it appears that the quintet appear to balance their past with the present to deliver stellar guitar riffs, stirring keyboard lines, energetic rhythms, and temper this with appropriate amounts of neo-classical/ symphonic drama. “Seven Reigns” features a back and forth solo spot from guitarist Simone Campione and keyboardist Giuseppe Carrubba. “Harbringer Of A New Dawn” gives Alessio a change to flex not only his vibrato range but also his care and concern for delivering the right melody at the right time- keeping things in balance with versatility in the verses.

The off time work that begins “Walls Of The Emperor” from Claudio and Dario rivals some of the best Dream Theater parts through the years- and I love the overall attention to atmosphere that coincides with the storyline… you feel like you are taking a journey right back to ancient China with many of the riffs and chord changes. Background choirs and theatrical landscapes alternate between the power charged Thy Majestie instrumentation- and there’s even a cool guest appearance from Fabio Lione on the slower building “End Of The Days” where he steps outside his comfort zone and provides adequate color to Alessio’s stunning melodies.

Mesmerizing, exciting, invigorating- those who live for symphonic laden power/ progressive metal with minute attention to detail will savor “ShiHuangDi”- the best Thy Majestie to date. Anyone into the early Roy Khan-Kamelot years, Symphony X and the last two Thy Majestie albums should be very impressed.