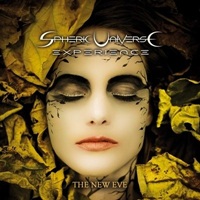 Growth can be astonishing, perplexing, and uncomfortable- especially within the progressive metal spectrum. It’s a tightrope every musician in the genre walks, the ability to stretch, expand, and forge new territory with every album- while also hoping your fan base joins you for the adventure. On the fourth album from France’s Spheric Universe Experience “The New Eve”, the moves appear to be much more technology/ electronically driven- and after repeated exposures signal a sound not very appealing to my ears.

It is one thing to be simpler, darker, down-tuned, or introducing ‘groove’ elements in the hopes of retaining audience interest. The obvious staccato elements along with the sprinkling of industrial/ techno keyboards for “Never Heal” may be fine for Disturbed or Korn fans, but I think S.U.E. followers won’t be so forgiving. The snare sound is a little too mechanical as well- and I struggled to make it many times to the second half of the album, which isn’t good on an 8 song, 51 minute recording. The emotional seven minute ballad “Angel” and riff chop heroics throughout “Self Abuse” prove the band still can sweep the progressive metal minded off the ground- but overall I feel “The New Eve” will struggle to find wide acceptance for its decidedly modern approach.

“Anima” remains my favorite Spheric Universe Experience album to date. Who knows, years down the line people may herald “The New Eve” as a breakthrough- but for now, I think this one will rest comfortably in my coffers.