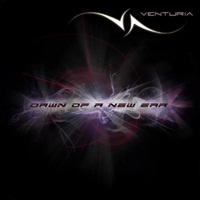 The third album from French melodic/ semi-progressive metal band Venturia “Dawn of a New Era” contains a series of changes which explain the four year gap between releases. Guitarist/ keyboardist Charly Sahona took over the male lead vocals from Marc Ferreira when he parted ways with the group in 2009. In October 2010, long time drummer Diego Rapacchietti quit the band, allowing Frederic Marchal to slide into the percussion slot. Factor in a solo album for Charly hitting the streets also in 2010 and his selection to play the live Guitar Idol 3 finale in London England in December 2010- and you now know why life circumstances can cause longer album gestation periods for artists in modern times.

Looking at the 8 songs on display, the quartet inject a heavier bass tone and more rhythmic element to their sound- sometimes a little more modern with the grooves on tracks like “Devil In Disguise” and “A New Dawn Rising”- but the dual male/ female vocals between Charly and Lydie Lazulli are clear, clean and crisp as you need for this style. Expect keyboards that have this electric, new wave 80’s sound even on a mid-tempo, epic-type arrangement like “What If I” which is one of Lydie’s stronger, passionate performances on the record. The closing 7 minute plus “A Land Of Dreams” opens with a series of slower drum fills and crash cymbal exercises from Frederic before the churning guitars and progressive, open chords weave in their sonic textures.

Venturia place a greater emphasis on heart-wrenching vocal melodies and instrumental hooks which is why I consider them more on the lighter side of progressive metal. I think they have a good template to draw from, the dual male/ female vocals and heavier, modern elements allow this release to stick out from their contemporaries. “Dawn Of A New Era” certainly has appeal for people into Lacuna Coil, Within Temptation and Dream Theater.

SORROWED – At The Ruins