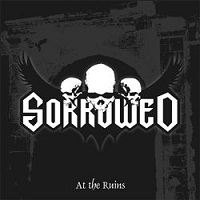 SORROWED – At The Ruins

Arising from the dead after 4 demo releases in the late 90’s to 2003, “At The Ruins” from Helsinki, Finland’s Sorrowed is an 8 song debut album in the death/thrash vein. Elements of Slayer, At The Gates, and Pantera come to the forefront, as guitarist Jape Nummenpaa’s vocals rumble with steady, stirring screeches and screams. “War” features a bevy of King/Hanneman riff maneuvers, while the drums alternate between power and thrash tempos.

Sorrowed isn’t bad, but then again what they play is a style that’s been performed for decades- so regurgitating your favorite melodies and riffs and cutting and pasting the themes in the hopes of your own development doesn’t make for an enthralling listen.