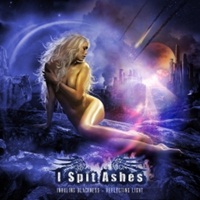 Metal 2.0 as a style apparently incorporates cyber computer/ industrial elements into normative modern philosophy. Germany’s I Spit Ashes (what a great moniker) wish to develop fresh terrain with their cross-pollinated material for this debut 11 track album “Inhaling Blackness… Reflecting Light”. Keyboard touches and electronic samples punctuate important chorus and bridge work in “Crossing The Borderline” and “Error Concept I” – but for the most part I’d classify the quintet in a slightly melodic, mid-tempo death category with elements of Dark Tranquility and Soilwork coming into the forefront of my mind.

After an atmospheric “N.D.X.” intro, the dual guitar explosiveness from Bernhard Lindner and Emanuel Seis overtakes your speakers on “Missper”, the slow skipping verse parts going to and fro as if traversing mountainous valleys. The acidic demon screams from Benedikt Rathsmann bellow like the influential Gothenburg brigade- accenting low grooves within “Cracks In The Mirror” that will either enthrall or become nails on a chalkboard to your eardrums. The reflective instrumental “One Star Per Tear” conveys a sense of slow motion space travel, different keyboard tones filling the landscape while a lone electronic drum beats softly.

The cover art isn’t indicative of what you’ll hear- and something that would have been better suited to a more gimmicky band in need of Photoshopped nudity to attract attention. The Metal 2.0 category speaks volumes- and after a number of playbacks I think I Spit Ashes could have a decent, fruitful future ahead of them. The sound overall has enough chug and heaviness to attract some of the underground, along with industrial and electronic elements that I believe could grab a lot of alternative, fringe crowds.

“Inhaling Blackness… Reflecting Light” could be a sleeper hit, it’s one of those albums that sneaks into your subconscious when you least expect it.