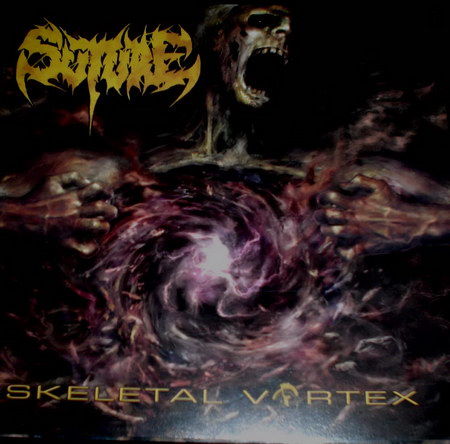 Brutal death metal for the brave.

Suture is back on the map after splitting up back in 2008. The US trio released "Skeletal Vortex" right before they called it quits but Soulflesh Collector Rec thought it would be nice to re-release the album as the now reunited band write new material. Their debut release "Carnivorous Urge to Kill" from 2002 is unknown to me so I cannot comment on any musical progression on the six years it took to write "Skeletal Vortex".

"Skeletal Vortex"  is a slab of brutal US death metal to sum it up. Heavy, hard hitting brutality which leaves little room for breathing. The vocal is Glen Benton inspired and easy to interpret with lyrics in hand. The riffing has its influences from the east coast but they also draw influences from the sunnier side of the US death metal landscape (Florida).  Immolation without the intricate arrangements may be a fitting description. The technicality bar is set high but the hooks are missing. The songs flows good but as noted, something is missing to keep it interesting after a couple of spins. The structure and arrangements are good but they lack some of  the originality that sets them apart from the mass. Personally I enjoy "Skeletal Vortex", the production sits well and they manage to set the mood. I will listen to this album more but in the ocean of slamming death metal bands out there I am not sure this will float well when the tides rise.