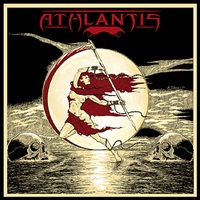 The second album from Italy’s Athlantis is my first exposure to the quartet’s power metal wares. “M.W.N.D.” features a new vocalist in Jack Spider, a new drummer in Enry Sydoz as well as the experienced guitar/ production skills of Pier Gonella (ex-Labyrinth) and bassist/ keyboardist Steve Vawamas (Mastercastle, Shadows Of Steel). Out of the 12 songs, we also get 4 songs with guest vocal performances, including fellow Mastercastle vocalist Giorgia Gueglio on “Faraway” and “Again You”.

In the end, songs like “Getaway” and “Dry Gin” have the happy melodies and catchy hooks you’ve come to expect from most Italian power metal bands- plus an added good time hard rock edge to some of the riffing and lyrics. Jack’s vocals appear to be a little thin and weak in the higher range, and I think this is an area that needs definite improvement for the future sake of Athlantis gaining more of a foothold in the scene. The budget for the album appears very limited, as the double bass and guitars get a favorable, up front mix in comparison to Steve’s bass play.

I suppose if you want to take in a derivative of Gamma Ray and Stratovarius, “M.W.N.D.” won’t offend your ears- but at this point I really wonder if it’s necessary to sit through sub-par songwriting in the mid-tempo power realm once again? Probably a release for the ‘must have all’ crowd- otherwise stick to the masters of the craft Labyrinth and Vision Divine for the more melodic power offerings.

KOBRA AND THE LOTUS – Kobra and the Lotus