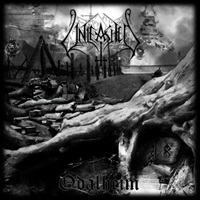 Twenty one years beyond their “Where No Life Dwells” debut album, Unleashed release their eleventh studio platter “Odalheim”. Becoming very self-contained in their later years with owning their personal recording studio as well as handling management within house I believe has helped the quartet shape their own destiny, and let Nuclear Blast do their job in getting this Viking death metal sound out to the masses who clamor for it.

The 11 songs on this album appear to have a heavier stance than 2010’s “As Yggdrasil Trembles” – while the tempos fluctuate between more mid-tempo to doom atmosphere on the title cut to almost black metal propensity with the charging “Fimbulwinter” or the Middle Eastern-like chord changes against the blast beats within “Rise Of The Maya Warriors”. Lead guitarist Fredrik Folkare takes his solo work very serious, carrying out every note with forethought and feeling to make sense for the sake of the song. “By Celtic and British Shores” even takes a stab at a riff/ drum tempo measure usually reserved for Meshuggah- only interpreted into the death metal field.

Unleashed also know when the listener needs a little bit of a sonic breather, incorporating small bursts of sparse, acoustic guitar action into “The Soil Of Our Fathers” and “The Hour Of Defeat” before the next electric assault commences. The trademark Johnny Hedlund deep yet clear vocals will always keep the band firmly in the death metal camp, as there are no signs of commercializing their songwriting or overall sound. I think this is closer to the mastery of “Hammer Battalion”, and as such I can recommend all Swedish /Viking death fans get “Odalheim”- delivering more of that aggressive, low tuned sound we’ve come to know and love through the years.