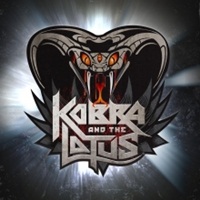 KOBRA AND THE LOTUS – Kobra and the Lotus

The thunder from Canada arrives in the form of the five-piece traditional- power metal oriented Kobra And The Lotus. With this self-titled 10 song, 42 minute effort, prepare yourself for an onslaught of guitar salvos and harmonies, steady double bass fueled drumming as well as the soaring, high pitched vocal confidence out of Kobra Paige. It’s been a few decades since I’ve heard such conviction pour out of a female fronted heavy metal band- there are reminders of the greatness of Judas Priest and Chastain throughout, with the added benefit of a sonically sharp production.

The first video single “Welcome To My Funeral” catches your headspace immediately with this exotic, choppy riff pattern and Kobra’s clear melodies with added evil emphasis on many of the trailing notes during the main verses and choruses. Guitarists Timothy Vega and Jasio Kulakowski wield some interesting twin harmonies with the right pitch bends, bringing back some of the best “Painkiller” or late 80’s/ early 90’s Vicious Rumors reference points on songs like the to and fro “My Life” or the more Chastain-like closer “Aria Of Karmika”. The song structures are quite compact, and if there’s one area I hope they explore more it would be the epic arrangement, as the band members have great musical knowledge to be able to add some longer instrumental sections to really get their audience fired up.

Traditional metal may sometimes fade into the background while other sub-genres take center stage, but with acts like Kobra And The Lotus plying their wares in the form of new material, there is no doubt the movement will live on for future generations. An outstanding debut and hopefully will inspire other like-minded individuals to up their game for this is addictive and metal to the bone.