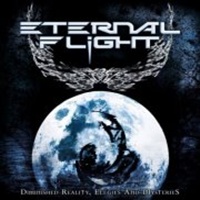 Third albums in the metal realm are pinnacle releases. You’ve usually shed any original influences, developed chemistry with your band mates and through a combination of life experience and road work know where you want to go as a unit. For French power/ progressive metal band Eternal Flight, their previous two albums made a decent impression on the scene- so vocalist/songwriter Gerard Fois knows he needs to pull out all the stops on “D.R.E.A.M.S.”- a 10 song plus intro effort loaded with expert talent and skill level for all progressive/power metal fans to savor.

Gerard plays acoustic guitars, keyboards and most of the bass on this album- gaining the services of Angra’s Ricardo Confessori on drums for 9 tracks, Julien Bouvier for lead and rhythm guitars, and some guest lead work from Mark McGee, Chris Caffery and Rob Love Magnusson. Gerard now has a full time lineup for Eternal Flight (guitarist Chris Gojon, drummer Julien Racine and bassist Adrien Zoni joining the other Julien), so expect the five piece to bring songs like “Fantasea”, the darker Fates Warning-esque “Firedancer” and more Pink Floyd meets Yes acoustic laden “Black Sun” to even stronger heights in a live setting.

On the 7:33 “The Meeting” Gerard reaches up to hit some soaring James Rivera meets Rob Halford operatic parts while the music again circulates between an acoustic opening and closing to progressive electric movements with some Middle Eastern slide guitar action courtesy of Mark McGee. The final song is a cover of Dio’s “Night People” which receives a modern energetic pump up through it’s double bass work and Gerard’s personal vocal comfort with the song as he adds more aggressive inflection in certain verses.

Eternal Flight seem to have more American metal influences than their own European contemporaries- I hear artists like Vicious Rumors, Fates Warning, and Helstar more than anyone else on this album. “D.R.E.A.M.S.” may not be the most straightforward album from the group, but I believe with deeper exposure you’ll come to love this material in a fresh light.

WORK OF ART – In Progress