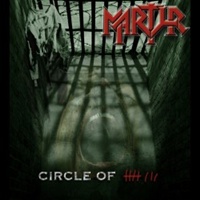 Here’s another history lesson for the metal veterans. 25 years after their last studio album, Dutch quintet Martyr unleash a third album with “Circle Of 8”. Their first go around from 1982-1987 allowed the band to make a couple of compilation appearances with Roadrunner and Metal Blade, release two albums on smaller independent labels and pepper the audience with a slightly technical brand of metal that had a NWOBHM flavor. Reuniting in 2001, the band have been playing small festivals across mainland Europe and opened for artists like Lizzy Borden, Vicious Rumors, Jaguar, and Evergrey among others preparing them for this 12 song, hour long recording.

Given my first introduction to the band, Martyr assuredly have an old school traditional meets 70’s doom vibe going for them. Vocalist Rop van Haren possesses one of those morose, emotionally driven attitudes that works perfectly on the sullen “All Warriors Blood” and then keeps up with the up tempo power proceedings on the follow up “The Uninvited”- which also features a few nifty bass highlights from Toine van der Linden. “Fake” has a slightly modern chugging element in the riffing from Marcel Heesakkers and Rick Bouwman that doesn’t really sound appropriate against the rest of this album’s material- and Rop’s aggressive melodies aren’t that convincing which makes this quite a filler track.

As good as some of the technique can be on a song like “Locked”, Martyr really fall into the quagmire because their material doesn’t contain enough good hooks to lift itself above a third rate Metal Church/ Meliah Rage act if they careened headlong into 90’s grooves. My advice would be cutting out the excess, extended riffing, hone in on tighter structures and lock into stronger hooks or audiences will be heading for the exits during your next gig appearances.