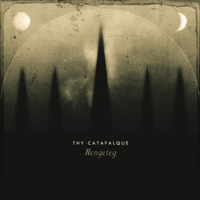 Thy Catafalque continues their journey, completing each new step with a solid installment of their Slavic-extreme-avantgarde-sometimes ambient-folk metal. There really is no good way of describing Thy Catafalque’s sonic endeavors. You have to hear it to understand. Key words would be prominent ambient backgrounds, weirdly captivating melodies, and consistently colored by unmistakable quality. The band definitely has found a niche of their own, and how many bands can claim that in this day and age. This should be interesting for fans of ambient extreme metal as well as folk metal freaks and followers of progressive rock/metal/extreme metal.

Having established all the great features of this uniquely innovative band, I must say, however, that I found their two last albums to be more captivating than “Rengeteg”. It starts out really well. The two first tracks exemplify the genuine talent and style that makes Thy Catafalque so oddly captivating. But from there on I find myself losing interest. A larger part of the album leans towards ambient extreme metal this time, and I find it somewhat repetitive and less engaging than it was on the last album; “Róka Hasa Rádió”.

I also feel that Thy Catafalque exploits their own formula a bit on “Rengeteg”. Some of the moods and melodies appear fairly similar to stuff from their earlier albums. “Rengeteg” is still a solid album, it just seems like Thy Catafalque have hit a bump in their otherwise quite so exploratory sonic output. Next time around I will expect something new added to the brew. I don’t care if it is melody wise, instrumentally or production wise. They could add a triangle and a screaming monkey for all I care. Just don’t end up copying yourself to any larger extent.

If you haven’t heard the band before I would recommend “Tűnő idő tárlat” or “Róka Hasa Rádió” before this one. Still, if you are a fan I don’t think you’ll be disappointed by “Rengeteg” either. As mentioned above, Thy Catafalque is consistently solid in their output. My preferring of their last album over this one could of course be subjective. But I must say that I think the two first tracks alone make “Rengeteg” worth acquiring.