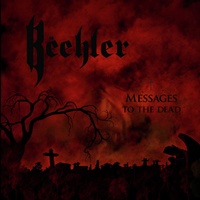 BEEHLER – Messages to the Dead

When John Ricci forges ahead with Exciter, the former vocalist/drummer Dan Beehler also plows forward with his own four piece thrash act in his own namesake. “Messages To The Dead” continues the old school, no frills arrangements with his unique anguished screams and a backing band who play with that youthful, raw exuberance you’ve come to know and love with the early 80’s Exciter records. 11 songs that quickly slay any human with crazy, energetic solos, thunderous bass and Dan’s powerhouse fills and consistent snare/double bass presence.

The slower “Organized Mayhem” and “Destitude Abuser” offer dynamic contrast against the bullet train opener “Jet Black” and equally potent riff machine “Destroy”. The double guitar tandem of Scott Walsh and Sean Brophy allow for a thicker Beehler sonic assault, and they even throw in a tasteful, slower lead break or two to prove you don’t necessarily have to wrestle with the fret board to get your melodic points across. Those who believe that as Dan ages his vocals will smooth out may be in for caustic seizures, as tracks like “Kill The Witch” and “Eternal Tormentor” prove his rough around the edges delivery separates the ardent metal aficionado from the trendy ones.

If I were to compare recent releases in the Exciter versus Beehler catalogs, “Messages To The Dead” wins by a landslide- both in the songwriting and the production departments. Keeping his productivity strong (word is he’s already half way done writing the follow up), Dan Beehler and company know the hard work lays ahead of them but plan on winning over metal audiences wherever they can play worldwide. Canadian thrash lives on!