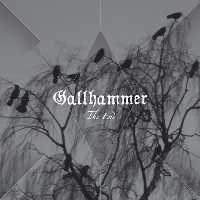 Gallhammer picked the wrong song when choosing a title track for their album. They should have gone with track number two “Rubbish CG 22”. If there ever was a categorization for garbage, this is the category “The End” would fall under. Rarely have I heard such a display of utter lack in talent. I wouldn’t let these guys perform a late night show at my local brown pub if they paid me for it.

You can call it sludge, grudge or fudge for all I care. There is nothing appealing to me about “The End”, except perhaps that the title might indicate what hopefully is to become of Gallhammer’s career. I truly believe that the only reason for Gallhammer’s success is that they are the only all-girl-metal-band to ever emerge from Japan. Throw in corpse paint and black metal imagery and evidently you have the recipe for record company cash cow.

The production is awful. It sounds like they recorded in their own living room, but decided to put the microphones in the next room. Seriously, it sounds like you’re listening to a band through a wall, playing in your neighbor’s apartment. If this is some clever scheme to cover the fact that these girls are completely worthless in everything they do on this album, I don’t know, but if you ever spend money on this album, you are in my eyes as worthless as this entire band.

I don’t know if it’s worth mentioning, but I am an absolute Japanese fanatic. I devour everything even remotely connected to Japanese culture and media. That is why I perhaps tend to give Japanese bands a little more slack when reviewing them, as opposed to European or American bands. This has also been the case with this review. Had Gallhammer come from around my parts of town, I would not have been so forgiving.

ILLNATH – Third Act in the Theatre of Madness