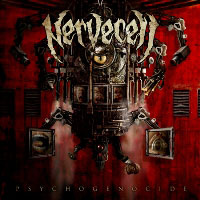 This death metal ensemble hailing from Dubai/United Arab Emirates are back with their sophomore album, and it rocks like a charm. This is well executed, nicely produced and nifty put together material that keeps my interest up almost throughout the album. The instrumental performance is pristine and the variation makes for an entertaining album with few drawbacks.

To start with the good; that which gives Nervcell a sort of identity in today’s death metal scene is their amalgamation of old school/new school death metal, added with a pinch of thrash metal frenzy. The production is as clinical as they come, but the songs still clearly are inspired by what I would classify as old school death metal (Tampa scene). As such, I don’t find the band very comparable to the Polish Death scene. They simply have their own style.

On the other hand, after repeated listening there are few songs that really stick with me. It is too bad, when they do have a style of their own, that the melodies don’t equal this sense of identity. As far as old school death metal melodic content goes, there is nothing new under the sun on “Psychogenocide”. These are all song structures you have heard before. The exception would be the title track which has some unforgettable monster riffing going on. I still feel that Nervecell has room for improvement. Their true potential is yet to unfold I suspect. If they could conjure up some more original/innovative melodic content the band could very well be propelled into stardom.

This album is nevertheless a huge step in the right direction for Nervecell. It is all performed with impeccable professionalism. It might just be that yours truly have lent ears to so abnormally many death metal acts that he just doesn’t appreciate a quality product anymore, unless it is ripe with originality. I would be surprised if anything better would come from Dubai in the near future, or from anywhere else for that matter. The quality is undeniable, so feel free to check it out. It might just blow you away.