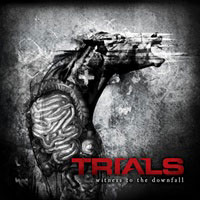 TRIALS – Witness To The Downfall

Every few years, certain bands just capture the imagination of the public and you can figure within a few years there will be a second generation expanding upon that sound with their own bands. Trials from Chicago appear to be one of those bands who’ve taken a shining to the Machine Head and Gojira catalogs and seeking out their own sound on this 9 song debut album. It’s modern thrash with a brutal guitar tone and the duality Phil Anselmo blood curdling rough vocals along with the semi-clean alternative approach when called for.

Feel the dive bomb guitar squeals against the China crash cymbal heroics for “Powerless”, a number recollecting the best “Burn My Eyes” moments from early Machine Head. The follow up “This Is Starvation” even contains a couple of semi-blast beat maneuvers as the slow, choppy guitar groove slams home the instrumental sections making this 6:13 track very wide open beyond the normal angst. Vocalist/guitarist Mark Sugar seems a natural at spitting out caustic verses and then switching things up to a clean melodic voice, best evidenced in the slightly rhythmically progressive “Hammer” which intertwines a Soilwork arrangement musically with Testament-like guitar pull offs and tight drum transitions.

Former drummer Sasha Horn (Novembers Doom, These Are They) is up for the challenge, as his legs and arms get quite the aerobic workout with the speed and finesse of a number like “Shadows And Traps” – where for some measures he needs to get the double bass rate in overdrive and other sections are playful, open and showcase his off-time snare to cymbal skills. I would guess newest addition Adam Kopecky will slide into this slot with equally adept percussion ability.

“Witness To The Downfall” is a record that rivals what the major independents put out in this modern thrash movement – with slightly more power, progression and ultimately a series of great songs. May they tour the world and slay the crowds.