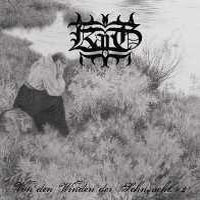 Ok, to be honest, this album isn’t that bad. The tone and atmosphere are as gloomy as a rainy day and the overlaying guitars add an ethereal quality that is simultaneously melancholy and uplifting. The drumming rolls along querulously in the background, bursting into blast-beats every now and again. It is just that we’ve heard so many similar releases in recent years, each falling short of the mark, that it is easy to become jaded with this genre, and that presents an obstacle when you first approach this album.

Once you get into it though, you find that there are hidden gems, riffs and turns of phrase that lift the music from the morass of mediocrity. A subtle dynamic makes the album strangely compelling and adds depth and flavour. Almost inaudible keyboards provide an extra layer to the forlorn sound and the vocals, cold and harsh, are spot on.

Fans of this type of music might not carry the same prejudices as I do and will likely appreciate this album. At 77 minutes, it certainly represents value for shoe-gazing.

TRIALS – Witness To The Downfall