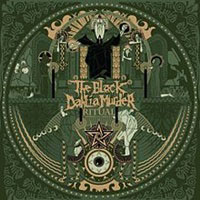 Melodic death metal, metal-core, death-core: call it what you will, the groundswell of support from sales and the live front propels the youth, and at the same time has seen bands like The Black Dahila Murder not only achieve chart action on Billboard, but also sell out small theater venues. Their latest album “Ritual” rips out another 12 caustic, energetic songs to their resume. Lead guitarist Ryan Knight gives any Berklee college maven food for thought on the spiraling lead work within “Moonlight Equilibrium” and “Conspiring With The Damned” among others.

Overall I believe The Black Dahila Murder have more in common with Carcass, Darkane and Florida death metal such as Malevolent Creation or older Morbid Angel when they intertwine the blast beats, blitzkrieg riffing and mix of Trevor Strnad’s low growls and high pitched shriek screams and that helps to maintain distinction from the normal American modern crossover act. The sudden acoustic guitar plucking in the middle of “Carbonized In Cruciform” threw my ears for a loop, but never fear – this five piece will never surrender to commercial pressures and be the band your parents and grandparents can also enjoy.

I’ll be the first to admit this isn’t my normal daily metal diet staple. But one can’t deny when all of the right elements are in place – the ferocity, the tenacity, the songwriting, the aggression, the little dynamic twists and turns – “Ritual” contains a decent representation of what you would expect as your face melted off in a live face to face encounter with The Black Dahila Murder.